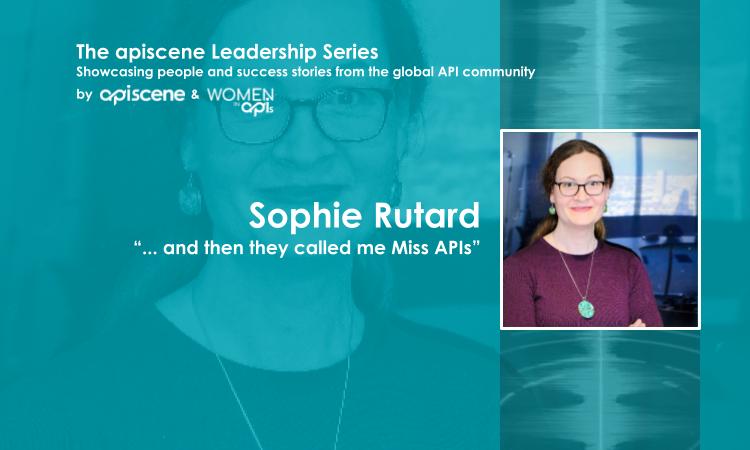 Sophie Rutard is Head of APIs at Euler Hermes, an industry-leading credit insurance business and part of the Allianz Group. Euler Hermes supports its business clients with making better decisions about the credit risk of their customers. Euler Hermes’ APIs enrich their client relationships and have evolved and expanded during the organisation’s wider multi-year transformation program. Claire Barrett caught up with Sophie recently to learn more about pivotal moments in her API story and their impact at Euler Hermes.

Claire: You’ve been involved in APIs since their outset at Euler Hermes. How did it start out?

Sophie : Euler Hermes first started using SOAP as a local service in Germany for key customer data exchange in 2007. I wasn’t really involved until later and admittedly, it was somewhat by chance. I’d been supporting our customers registering interest in using our online portals and took up a side project to implement secure emails. I soon became the inhouse expert in S/MIME email encryption and then started promoting secure email communications as a service to our customers. This called for larger volumes of certificates and an easier delivery process, so I ended up building a dedicated certificate issuing instance for our customers and partners. From there, it was a logical step to reuse the same product to issue certificates that would secure the SOAP web services used by our customers and partners likewise.

Then in 2011 I participated in a strategy meeting with our Group COO to discuss how to extend the strategic value of our local SOAP services. I went into the meeting as a security expert, and came out with a new role to elaborate and implement a Group-wide strategy for customer-facing API services.

C: So you formally became in charge of something bigger. What did this look like for you?

S: It was quite exciting! Actually, this was my first role as a people manager and from 2012 I had the unique opportunity to create a new team almost from scratch, with team members located in Hamburg, Paris and London. I started commuting weekly and quickly had to move entirely to Paris headquarters. My team maintained focus on our customers throughout, but by 2017 their onboarding experience was still too long and complex.

We saw REST as a better alternative to SOAP at the same time that a new CIO came on board. His leadership accelerated our API-centric thinking and advocated widely for its execution. APIs fast became a standard for everyone while the organisation was also adopting agile practices as part of a top-down organisational change.

This meant the role for my team changed from being centralised API design and 1-to-1 key customer support, to API governance. It called for training and coaching a different team who successfully created our API catalogue and design guidelines; an approval process in GitLAB; and customer self-service based on a developer portal.

C: You explained that most people now understand the importance of APIs as a topic, and that there is less talk around API strategy than earlier. What advice would you give people at other organisations who are earlier in the journey and looking to broaden understanding?

S: For those who struggle with IT-related objections; I would suggest referring to well-known examples like Netflix or Stripe: they are very visible examples of good apps with strong benefits from their strategies. Sharing open information such as Paypal design guides is also valuable. People should try and visit conferences and get back with clear success stories and facts about how others have created benefits associated with those APIs.

You must also always influence the decision-makers. You need to talk at a commercial not a technical level. If you come from a technical mindset, you can see the beauty of APIs, but why should an executive be expected to appreciate that? You need to show the impact on revenues, reduced complexity or the opportunities from new business models.

On the IT side, people may have invested a lot of their time, skills and professional growth into existing architectures which are well known and have served the organisation well over time. Some of our IT colleagues needed time to see the full potential, but by staying with us through the transition, we have been able to hold on to their deep knowledge and experience of our complex systems and they have become our biggest API champions.

C: You said you could have gone faster with APIs, but it would have called for more funding and resources all of which take time.

S: As for many organisations, IT used to be considered as mostly a cost side of our business. This changed dramatically with our broader digital transformation so that technology is now very much seen as core to the company. Our change in funding and priorities has also involved change in our workforce: we have increased the percentage of internal IT team members and specifically to manage transition through to ongoing run at the end of projects. This also helps with finding and retaining the best people.

C: Knowing what you know now, what would you have done differently?

S: With earlier funding and resources, I’d have had someone dedicated to communications: keeping different stakeholders up-to-date constantly through the process; explaining the benefits and success stories associated with our APIs; and providing different ways for people to accelerate through the process of understanding the opportunities and benefits. For example, some of our sales people were concerned that the process would be more complex for our customers. Now, they are able to explain what it means to our customers and are great advocates for the advantage APIs bring to our go-to-market.

If I had my time again, I’d have put extra effort into researching and monitoring best practice in the market, and in tracking what competitors are doing. I’d also have run more experimentation activities to get early feedback and constant improvements from customers and expectations. This could have enabled us to build stronger investment cases earlier for specific APIs and notably small-ish investments for faster results as opposed to seeking support for large projects.

However, we have had strong success with aligning IT and business teams, for example with our sales and marketing and benefiting from the wider organisational transformation: this has been critical to our success.

C: You are now transitioning to a new Developer Relations role, a discipline that has come out of large technology companies: what does this look like for you?

S: “Dev Rel” is a difficult term. I see it as an API-based role looking externally and helping customers etc. We also have an internal workplace-centric role; choosing the languages they want/like without adding complexity. It’s about managing trade-offs such as around documentation expectations. It’s a new capability for the company and important for us to continue to innovate for our clients.

C: How do you see the role applying to financial services organisations?

S: It would feel strange to take someone from marketing, and have them look after Dev Rel. Customers gave us feedback that they like that we give the swagger spec on our developer portal, while others don’t. To me, it was surprising that this was even mentioned, since we took it for granted that something as basic as the swagger would be available on a dev portal. But that’s probably a good reason why Dev Rel needs to be managed by people who are close to your customers who are developers.

One of the benefits that I bring is that I have always worked with developers and have also worked with C-level. I mix the requirements of developers that represent one persona working at a technical level; and at another level the people who are influenced by the development. For example, I can explain what it would mean to one of our client’s CFOs and so on.

C: How has your career and personal brand been impacted / shaped by your involvement in APIs?

S: Firstly, I hadn’t thought about my own brand, I just enjoyed the opportunity I’d been given. Working at headquarters in Paris from 2012 was great for me, being half French. It was really hard work, particularly as I continued to commute from Germany. The first time Mehdi Medjaoui invited me to do a talk at apidays, I was “Really? I can do that?”   I didn’t feel like I was an expert in the industry. I tried my talk and got outstanding feedback from the audience in 2018 which I never expected. A lot of people saw that it was super-clear; super-valuable and some people even told me it was the best talk of the conference. Exposing things on LinkedIn also turned out to be quite valuable, because it extends one’s network. But again, it just happened: I didn’t expect any of that. Sharing things on LinkedIn was a bit more planned, and it also turned out that I made some really valuable contacts through it.

Internally at EH I get more visibility: our communications team has used my presentations to promote what we are doing internally. I am known internally as “Miss API” where it has certainly helped with my career. I also had the opportunity to present our achievements in Munich to the global Allianz community, which again created valuable new connections.

C: Lastly, what have you personally learnt through your API leadership at Euler Hermes and what’s next?

S: I’ve learnt to select and coach people; to apply agile ways of working. By being part of different steering groups and leadership teams, my influence in the company has grown. And in the last couple of years, I’ve improved my presentation skills. My teams are now really proud that I get on stage to represent them.

Professionally, I am continuing to grow our teams’ capability and impact and of course this is now predominantly done remotely. At a personal level, I admit that the years of commuting got difficult in terms of maintaining personal energy. It’s only now, and of course more so under lockdown, that I realise how much time I now have for doing other things like playing guitar and daily yoga practice.

Claire Barrett is a consultant who makes strategy happen. Claire is committed to making a difference for growing the diversity and talent in technology from the grass roots and co-leads the apidays Women In APIs initiative.

Strategy Translator and Women In APIs Lead
I make strategy happen. I’m a translator of goals and aspirations into technology change that sticks. Galvanising teams and individuals around what it takes to balance executing short-term priorities for customers and stakeholders while making tangible progress towards longer-term transformational outcomes.
view all posts